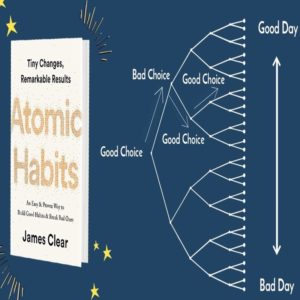 Recently I have been reading a book called “Atomic Habits” by James Clear.

I have not finished reading this book yet; I am just halfway through it, but it has already inspired me a lot. In the book, James states why most people have goals, but they can’t achieve their goals. It’s not an issue about the purpose, but the goal system to reach the goal.

One day I had lunch with my colleague Jun; I shared with her the book I just finished reading “Zone to Win.” She said that she had already read 5 books this year and told me what she was reading.

I asked her how she could have finished reading 5 books already when it was just the 2nd month of the year. She said she blocks her time at least for 1 hour every night to do some reading.

I realized why I couldn’t achieve my reading goal as I did not have a system for reaching the goal as I didn’t block my time for reading every day.

On the other hand, I can progress steadily on the piano learning path. Learning piano is also my goal. Why do I have a better result with that? Because I have a goal system; it is to practice piano for 45 minutes every day. According to the book, James mentioned, “Too often, we convince ourselves that massive success requires massive action.” He also laid out some simple math: “if you can get 1 percent better each day for one year; you’ll end up thirty-seven times better by the time you’re done.”

So it’s not magic; it is the tiny improvements that can make a big difference. Although lots of the time you are not aware of that.

2. You are what you repeat

Lots of statistics are about the trend of people’s habits, such as this, an average adult spends nearly half a day interacting with media and spends most of their waking hours staring at screens. On the one hand, people feel they don’t have time to go to the gym, do reading,  watch a good movie or have enough sleep hours. But on the other hand, we don’t realize how many hours of our daily life the screen or social media absorbs. We don’t know it as it already has become our habit.

One day I could not find my cell phone before leaving my office. I suddenly felt panic as my habit is that I am very dependent on my cell phone. Not only does my cell phone have all my friends’ and family’s contacts, their birthdates, all my appointments, but I have all my social media accounts,  which I log on a couple of times every day to check my friends’ status and interact with them. I also have all my passwords stored in my phone. Without my phone, I have lost the connection to my friends and lost all the information which is vital for my daily life.

However, on the other hand, during those 30 minutes when I couldn’t find my phone, I didn’t have a chance to repeat my habit by picking up the phone and checking WeChat after work to see who left me a message and who posted something interesting.

Suddenly I realized it can be a good thing if I don’t have a phone; I cannot repeat my habit of checking Wechat.

Although I found my phone later, I realized that one habit I have, and maybe lots of people have, is to pay too much attention to social media but still claim we don’t have enough time every day. That habit creates another lousy habit of staying up late; as we have not organized our time wisely, and spend too much time going through friends’ moments and posts. Then we definitely have less time for other things; we try to stay up late to squeeze in some hours to make up the time we spent on screen.

It relates to another point James mentioned, “You are what you repeat,” I can’t agree more. And lots of habits are not standalone habits but have a ripple effect. (link to the book here)

For example, John has a habit he is still working on which is to work on homework before the deadline is approaching. He has 8 subjects to work on this semester. Since John does not work on the assignment in the early stage, one time there were 3 subjects due together. He became very stressed. Under those circumstances, he cannot do the task well; the quality goes down. After submitting them, two out of three were sent back for revision due to the homework quality not being met. He became more stressed to rework on some of them. And then he lost some confidence in the subject as he thinks he is not doing well in it.

I have communicated with several teachers, and they all told me John is a smart student and has the academic capability to do well, but he just does not have a good study habit. Having his chat open while working on assignments, he always gets interrupted from time to time from the conversations; and also working on assignments at the last minute.

I asked John, what kind of student he would like to become, a confident, organized one who’s doing better than he is now or a student who is always rushing to do his homework before the deadline. He said the first choice. I said that’s right. Then you need to change your habits. Instead of working on the homework at the last minute, you need to start work on it after it’s given. Instead of paying half of your attention to your study and the other half being grabbed by Discord –a chat system that he and his friends are using; you need to have it turned off while working on assignments.

After being made aware of his bad habit and making some changes, he told me last week that he got two 7 out of 8 marks in two subjects. He’s proud of himself. I congratulated him but also reminded him that he needs to keep the habit for 90 days; then, it can become a permanent habit instead of a temporary habit.

I don’t think I have finished this habit topic yet, as there are so many things related to it. I am going to continue the subject as I read more of the book.

So what is your personal style is and what are your habits?