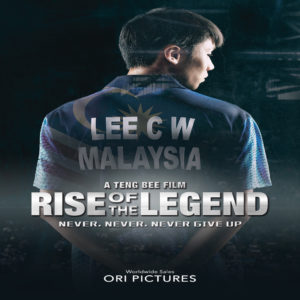 Last weekend for movie night with my son, we watched “Lee Chong Wei: Rise of the Legend.” The movie is about a badminton champion, Lee Chong Wei in Malaysia, and it was released earlier this year.

John has been playing badminton for a few years as a hobby, so I think this movie can have some engagement with him.

Chong Wei grew up in a low-income family of 4 siblings. Chong Wei’s father hoped his son would focus on study so he could find a good job.

However, since his childhood, Chong Wei was very interested in badminton.  His family couldn’t afford to buy him a badminton racket, and he earned his first shuttlecock by helping a badminton store owner to do badminton racket threading. Since Chong Wei did not have a racket, he practiced badminton with the flat side of a cooking pan.

He started to play badminton at the age of 11, and he won lots of trophies during underground badminton matches. After his first win, his father noticed that, and he crushed Chong Wei’s first racket, which had been earned by Chong Wei after lots of threading in the badminton store.

His father refused the invitation when a professional coach reached out to them,  telling him that Chong Wei had talent at badminton. However, Chong Wei was so passionate about badminton; he practiced hard at home when his father was out at work.

Finally, he was sent to the national badminton college when he was 17, as his father agreed with him to do badminton. In the beginning, several students bullied him. They laughed at him and joked that he looked like a monkey; his gesture of playing badminton was messy, and he was not properly trained. Due to the lack of nutrition he received growing up in a low-income family, he was not strong enough to handle the intensive training. He was even not tall enough to be selected for some competitions. He jumped very hard and tried to grow taller, and his caring mom cooked soup from potato roots, as there is a saying the soup will help children to grow.

He started to participate in the national championship at 18; then he soon became a rising star in Malaysia. But after he joined in a worldwide tournament, he lost several competitions in the first several rounds and the school board lost confidence in him and his coach was threatened with losing his job because he was the person who trusted in him and supported Chong Wei.

In the 2006 Malaysia Badminton World Championship, he finally won a gold medal and became the number 1 player in the world for the first time. However, he lost several times to the Chinese badminton player Dan Lin in the next world championships. Until 2012, he started to win again.

I got inspired by Chong Wei’s real-life story and would like to write this blog. There are three inspirations from his story:

First, there were all kinds of barriers to his badminton playing in his first year;  including no money to buy the shuttlecock and badminton racket; strong opposition from his father to prevent him from playing badminton; the discouragement to his badminton playing from his father; his father threw out the trophies he won from the secret underground games and crushed his first badminton racket which was earned by him through helping a badminton store owner to do lots of hours of threading; After all the barriers, Chong Weil followed his heart as a badminton lover and overcame all kinds of obstacles.

Because of the inner generated passion inside him, Chong Wei did his very best to embrace badminton; although he did not have supporters or the environment to do so. As I mentioned in my previous blog “self-motivation,” Chong Wei is very motivated to pursue his passion. And he works hard on that.

Sometimes, I hear people said that they give up pursuing their hobbies due to barriers or discouragement. I saw persistence from Chong Wei, and although he was very discouraged and not supported, he still tried and played hard.

Second, ignore the ironical voice from others; lots of people are afraid of being laughed at as they are too caring about what others are thinking. However, who knows better about yourself than you? People can easily laugh at others and be ironical since they don’t understand who you are and what you can do.

Just like my life so far, I have been discouraged lots of times; although sometimes it is just joking from my friends.

I remember I got the hairdresser to do my hair in a mushroom shape when I was a teen. I was laughed at by lots of my classmates in the beginning with my new haircut as nobody else had that hairstyle before me in my school. However, I liked it very much, and I was confident to walk into my classroom every day. After several days, some of the other students found it lovely and they followed me with mushroom hairstyles too.

I started to learn piano in this September 2018. One day I was asked my best friend V to play in front of her after one month’s learning. I then played in front of her, she burst out in laughter and joked that I was playing notes but not music.

But so what? I know that I am a beginner and I will pursue my learning experience as a hobby. I am assuming that in September 2019, I will be able to play more advanced and beautiful pieces and enjoy music at a more advanced level in 1 year.

Sometimes my son says he doesn’t want to do something because his classmates will laugh at him. I say that’s right if they laugh at you because they don’t know who you are. If others easily knock down a person, then it can be because they care too much about others’ opinions.

Third, is hard work. Chong Wei worked very hard on badminton. Nowadays, lots of kids are sent to all kinds of afterschool classes. They have a private coach, small group badminton practice and all sorts of activities. Lots of my mom friends are busy sending their kids to all kinds of classes. So far I am seeing very few kids who have this trait of working hard.

When I encourage John to do some reading, I suggest he reads for 45 mins. Usually, within 45 mins, John tells me he has finished reading. Or I ask John to practice piano for 60 mins; then he will set an alarm for 60 mins, walk back and forth during the practice, and then after 60 mins, he leaves the piano immediately as the time is up.

Sometimes, the difference can be just this easy —  working hard vs. not.