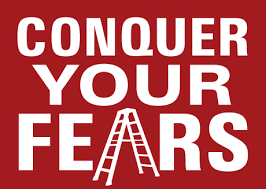 One day I had lunch with my colleague W; he talked about a colleague V who is courageous. I asked him why he made that comment.  He said she went to several countries by herself in November. I know V is a type of character I admire and it’s not surprising to hear that she’s brave. I followed my question, “Did she go there by herself?” W said she went there with a travel agency.

Undoubtedly it is not easy for a person to travel to new countries alone. The conversation pulled me back to my own experience. One year after I started to work, I went to Singapore and Malaysia alone with a travel agency. During the trip, the others were couples or families but myself, on the trip I was the only person to be alone. I felt proud that I conquered one fear at that time as I am a people person who likes to stay with people.

The conversation triggered me to review myself. How many fears have I overcome during the year that I should be proud to celebrate at the end of 2018? Sometimes we need to pat ourselves on the back and tell ourselves: you did a great job to keep  moving and be recognized by ourselves, as we have been too busy to reflect that what we have done is excellent. We know how to praise others but sometimes just forgot about ourselves.

I can think of some big fears I have defeated in my recent years.

1.    I can live by myself alone in another country!

Although I had traveled to Vancouver a few times with my husband and my son, in 2010, I said goodbye to my family my son and my friends. I came to Vancouver by myself as a new immigrant; until 2013, I picked up my son from China, and he started to live with me since then. My husband is still traveling back and forth as a man’s ego does not allow him to come here and start his career from zero. (This situation has become a norm in North America: mom and the kids stay in North America and the husbands- who are the primary breadwinners, continue to work in China and feed the family, since most of them had a decent job in China, but they can’t find a good job here.)

2.    I am not fearful of starting over again. -Started from entry level in another country and grew up back in career!

I have been a marketing professional since 2005 in Cisco China, and I got promoted to be the Regional Marketing Manager in 2007. After moving to Vancouver, I was told I had better set a goal to switch to an administrative job instead of the marketing category. Marketing requires someone who knows the culture well and has advanced language proficiency. I carried a Chinese accent (I still have it today), and I am not a native English speaker. In the beginning, I needed to translate everything I wanted to say via my brain before I spoke. However, I followed my passion and stuck with my goal to find a marketing job, and several months later I saw it. Although I was back to the beginning of my marketing to be a marketing specialist to start; then I am grew to be a people manager again in 2018.

3.    I am not fearful of doing public speaking in English

I had no problem to do presentations and do public speaking in Chinese as I have been a marketing manager for years in China; BUT…I did feel very nervous and lost track of what I want to say when doing speaking in English.

When I did speaking in English during my MBA class, I was so nervous although we only had 20 students; I felt a big pressure from myself and I imagined that everyone was picking on me from a native speaker’s perspective.

Then I went to Toastmasters, and got my “competent communicator” after preparing and doing 10 speeches and numerous small table topic speeches.

Today I am confident to do a speech in English in public. I gave two presentations at my MBA school on a digital marketing topic in 2017.

4.    Went to MBA school and graduated with an increasing CGPA

When I was young, my mom liked to go to a fortune teller and I remember she said I could only get a bachelor degree in my life. However, I wanted to prove that she was wrong.

I went to the best business school in Vancouver – Beedie Graduate School of Simon Fraser University to pursue my MBA master degree. I did not do very well in the beginning; I had 1 C+ in the first term. However, in the last 2 semesters, I had a couple of A’s and A+’s. My family, my best friends and my mentor came to my convocation ceremony and witnessed my achievement in the spring of 2017.

Who’s the owner of your life? Yourself or the fortune teller?

5.    I conquered the fear after being discouraged

As I wrote in my blog “Finally, I am an MBA”, I mentioned I was told to take a break during my study as once my CGPA was 1.12 under the required to graduate and the major reason was my English language comprehensive level had not met the standard for an MBA student. In that 2 year break, I did lots of things to work on the language.

I wrote 45 blogs in English during the break (that was my initial thought to have my blog in the beginning). And I went to Toastmasters Club and did 10 speeches and got my Competent Communicator certificate.

In 2015 which was 2 years later after the big PAUSE, I applied to resume my MBA with those big achievements. At that time, I received several A+ and A’s. B+ was the worst score in my second half of my MBA.

At the beginning of the PAUSE, I told myself that maybe that was the “pause forever” sign, which would exactly prove the fortuneteller was right. The highest degree I can get is the Bachelor. I felt gloomy when I thought of the fear when I did the presentation in my class and the fear of communicating confidently with my group on group projects.

HOWEVER, when I returned, I was totally a different person as I hid the fear that my English was not good.

6.    I transformed my own career by self-learning

My initial start as a marketing professional was focused on event marketing. After 5 years in event marketing, I came to Vancouver and was looking for a similar job. Soon I found it was pretty hard to find such a job.

In 2010, it was the early stage to transform to digital marketing and lots of e-commerce websites were there.

I noticed it seemed less possible for me to look for an event marketing job as there were lots of small and medium-sized companies in Vancouver and they didn’t need a full-time event marketer.

I did some research and found that digital marketing was on trend and it would still be the trend as most people are on online platforms.

I started to take online courses and did self-learning after my full-time job, and after finishing my mom job, my son went to bed. I learned 2 hours each night, and I got 10+ certificates and passed exams on online marketing.

In 2013, I made my career transformation to the digital marketing career path. And I am still on the road and am continuing to improve it.

I mentioned in another blog that I finally learned how to swim after taking swimming lessons.

My naughty classmate scared me during a swimming activity when I was a kid, and after that, I had a fear of drowning and was hopeless in the water. Since then, although I tried several swimming classes I couldn’t overcome the fear of water.

Until last year, I decided to retake the lessons as I wanted to beat the fear. Then I made it; swimming has become one of my hobbies for exercise; although I am not the advanced swimmer at all.

But the most important thing is that I am not afraid of water anymore.

In my lifetime, I have been discouraged and laughed at, as not everyone understands who I am like I do.

When I told my colleagues I would like to take an MBA after immigrating to Vancouver, they all said it would be too hard to do that in another country in another language.

When I started to learn piano in September, my son joked that I wouldn’t last and that I would get bored quicky. My best friends said I was playing notes but not music, when I first played in front of her.

When I wanted to pursue the career of marketing, I was told by lots of professional headhunters that I should switch to an administrative job, as I had a big block – not being a native English speaker and had been in the country such a short time I didn’t even understand the culture well.

Last but not least, today my son can order almost whatever he wants at home and I can make the food for him.

I did not do any cooking before coming to Vancouver in 2010, as I had a worker do the cooking and cleaning.

The first half year to learn how to cook was very ironic as I made lots of mistakes and I didn’t enjoy learning cooking at all.

Until the year my son came to live with me, and I had no one else to ask for help on cooking, I started to have a responsibility to learn cooking.

Recently, I was called by my friends “master chef Tao” as I don’t just cook for my family, I invite my friends to my home and have a big party. I can cook 8-10 different dishes, which is enough to host 2-3 families.

Of course, I still have fears to conquer, but I will reveal them once I have started to work on them, instead of giving too much pressure to myself. At the end of 2018, I need to pat my back and tell myself; I have been trying hard to overcome different fears during the last eight years. Good job, T!!

What’s your fear and what are you going to work on it?