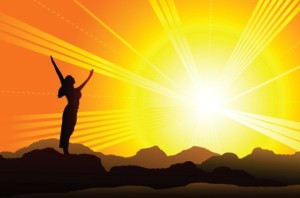 “You are so stupid; you haven’t done anything smart.” Have you been discouraged by someone like that in your life?

Spouses or life partners affect each other a lot as they are in a very close relationship. The first several years after I got married, I always thought I was a person who could not be independent and was not capable of doing lots of simple things ,such as cook a meal for my family. I relied on my family and my husband told me that I was not smart so I should always listen to him.

I had the belief that I was not a smart person for several years. I did not believe I could be like those intelligent women who can be very independent and be the owner of their lives. I was like a snail, who needed to stay in a shell and hide when meeting with any challenges. I believed that the only person who could help and rescue me was my spouse.

One day I had a car accident, after I just got my driver license in China. I hit a taxi when I was driving on a driveway. After I had heard a “bang” on my car, I turned off the engine and shrank in the car; I dared not open the door although the taxi driver was angrily knocking on the window.

I was afraid of looking at the driver and responding to his questions. I dared not have a conversation with him. I did not know what to do. The only thing I could do was to call my husband, who was traveling and out of the town, to send someone to save me.

I worked for a 500 company as my first job and progressed well in my career. I even was awarded the Best Employee and was sent to San Jose to receive my award during a Global Sales Meeting. But I was still very unconfident as I thought I was just lucky.

Although soon I got several promotions, I became a regional marketing manager in my late 20s; I still did not believe I did well.

I am a believer that mentality is critical. Once people are confident in themselves and think they can do something, most probably they can achieve it. On the other hand, if people lack confidence and believe their goal is far beyond their ability, most likely they can’t succeed because they have already given up trying.

Before I came to Vancouver, one of my colleagues asked me what was my plan after I quit my job in China and come here. I said I probably would go to graduate school and work on my master’s degree in Business Administration. At the same time, I also wanted to go to work. In my first three years in Vancouver, my son would not be with me, so I had plenty of time. I wanted to live a fulfilling life and at the same time, I could assimilate into the local life and culture sooner. My colleague looked at me, and he said: “Why do you challenge yourself so much? You could live an easier life by either studying or going to work instead of doing them at the same time. In addition to that, I would like to warn you that to get a Master’s degree in another country is very hard, lots of people fail. Do remember that you are not from an English speaking country. ”

After that conversation, I started to question myself if I should change my plan as it seemed not an easy task. My confidence became weaker; I was not sure if I could make it as I only traveled to some English speaking countries such as America and Canada very few times. I stayed there usually for less than two weeks.

I had been in that kind of struggling state for a while and did not know what my plan would be.

After I had landed in Vancouver, soon I found life was not as smooth as it was in China. I sent out 50+ resumes, but I got only one interview opportunity. I was interviewed twice by one of my dream companies; and then I was told that they decided to choose another candidate, as they were not comfortable with my Asian accent. The hiring manager said although she was impressed by my career background and work experience, she finally chose another candidate because I was a new immigrant.

After the training on job search and resume rewriting, I soon became an interview machine. Sometimes I got three interviews in one day. After numerous interviews, I finally got an offer. But in less than one year, I experienced the 1st laying off in my life. I got laid off with 20 other employees in one company without any notice. “Sorry, although you are a great performer, we need to cut our workforce due to the company’s economic difficulty. ” Then I cleaned everything on my desk and my drawer in half an hour then I left the company with two carbon boxes filled with my personal stuff.

I was not the kind of employee who was considered as a company’s asset anymore, liked I was in China; I felt that it could be me who did not make a great contribution to the business, so I got laid off.

In the following weeks, I interviewed with lots of recruiting agencies. Several of them suggested me to stay in the administrative area –which was my first position after I graduated from university ten years ago, as it would be easier to find a job, instead of marketing. Most people who work in marketing & communications are local people instead of immigrants.

I had thought that I could not have a dream job in Canada as my experiences and awards stayed in China. Nobody believed that I should continue my career in the marketing field as they thought I did not understand the culture, the social background and the complexities of the language.

I have been down for a while; nobody believes in me or that I should continue to work in the marketing field. I even did not believe in myself. My husband said I should change my career plan instead of sticking with it. “You could learn something else which does not require a high level of language skills,” He said.

I had lots of question marks in my mind, I said to myself “Since lots of people suggested so, maybe I shall change.”

Until one day, I met with my mentor –one of the top 100 female managers in Canada. After we had several conversations and got to know each other better, she said that I am such a smart young lady, it was a regret for those companies not having me.

I could not believe my ears when I first heard that comment. “Did she really mean it? Or she tried to comfort me and made me feel better?” I had thought that I was just not smart, so people are not confident in hiring me.

But my mentor repeatedly assured me that I was very intelligent and had lots of high abilities, “It’s the hiring manager’s loss for not having you.” She said this several times. She also pointed out lots of times where my strength lays during lots of conversations.

Soon I realized that I am a smart and hard working lady who pick up things quickly. I also also told that I have lots of strength in my personality: I am optimistic, adaptable, and ambitious and I am clear on what my dream is. I am also a very efficient person who manages my time wisely etc.

Her encouragement was like a magic pill. After she had told me so many times even after lots of my failures, I started to re-exam myself. I began to look at the mirror and told myself that:” I could be a treasure to a company, but they just had the bias on immigrants, so they dare not hire me. I am a smart person who can dream her dreams and achieve them. I am not a below average person. I am smart, and I know my strength and weakness ”

After my mentality had changed, I started to behave confidently. Soon after my confidence came back, I got an offer.

When I look back at my experiences, in the first ten year’s career, I had believed that every time I got promoted was because of luck. However, after coming to Vancouver and conquering the new environment, I became stronger and confident that I am not that type of person who could not control my own life. I could have lots of dreams in another country, and I could realize them one by one.

After I had been empowered by my mentor, I was raised up to a new level and my life changed. I started to realize that nothing is impossible with me.