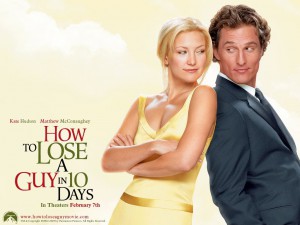 Lots of woman have dated and fallen in love in their lifetime. Sometimes a relationship ends but we do not why, or sometimes we just do not know why a romantic beginning cannot lead to a happy ending.

I watched a movie “How to lose a guy in 10 days” recently. It is a comedy, directed by Donald Petrie, starring Kate Hudson and Matthew McConaughey. Although the film was produced in 2003, people still can learn something from it on what to avoid in a relationship .

Andie Anderson (Kate Hudson) is a writer who works for a fashion magazine called Composure, a popular magazine for females. Her dream is to write anything she has interest in, such as religion, politics, economy and poverty. Working for a woman’s fashion magazine make it hard to make her dream come true. Her boss Lana tells her that one day she can write anything she likes after she has become a columnist Lana suggests to Andie to write a breakthrough article to help her to be famous.

Andie has a friend whose name is Michelle, who always has a short relationship and she loses those men soon after the first date. Andie is inspired by Michelle’s short love story .She tells her boss that she is going to write something on “how to lose a guy in 10 days” to educate women about how not to do stupid things to destroy a relationship.

On the other hand, the advertising executive Benjamin Barry (Matthew McConaughey) is competing with his rival colleagues Judy Spears and Judy Green on a big diamond advertisement business. In order to persuade his boss Robert Klein that he understands women so that he is qualified to take over the diamond advertisement project, Benjamin bets on making a woman fall in love with him in 10 days.

After Andie and Benjamin meet on a party, they find each other almost at the same time as their target for their hidden goal. Andie starts her experimental game on Benjamin .She tries to behave the way that men hate so that Ben is anxious to break up with her so that she can complete the article. On the other hand, Benjamin is trying his best to stick around no matter what Andie does in order to maintain the relationship. Ben wants to show to his boss and his rival colleagues that he wins Andie’s heart in 10 days.

In the film, Andie uses the women’s classic misbehaviors ,which lead to a bad relationship. What I learnt from the film are 5 rules to make a man dislike you:

Firstly, clingy behavior can scare men away. Andie left 18 messages to Ben in 20 minutes to tell Ben what she is doing and where she is. I have seen some female friends become very sticky and needy after they fell in love. They thought that men were their whole world so everything in their lives was all about him. In fact, an independent woman is more charming than a dependent woman in men’s eyes. I have heard from a husband, who complained with us about his wife .He said his wife was like a baby since she liked to ask his opinion almost on everything. Otherwise ,she did not know what to wear before going to work without her husband’s opnion. In her husband’s eyes, she was too dependent and had no confidence.

Secondly, don’t try to control a man’s private life. Everyone needs some bubble space and privacy. It is said that the mystery of a sweet relationship is to keep some distance regardless how long the relationship has been. Both women and men need a break in a love relationship to hang with their friends. In the filim, Andie copied Ben’s key and went to Ben’s house when Ben and his gang were smoking cigars and playing poker. Ben’s friends felt very uneasy when they saw Andie suddenly open the door and come into the room. She even did not permit those guys to have cigars.She also ask them to eat her vegetarian sandwichs instead of having their own snack.

Thirdly, don’t be oversensitive. Andie sends Ben a plant and tells him to take care of the baby plant just like to take care of their relationship. When Andie sees the plant is dying she thinks Ben is reluctant to take care of the plant, which indicates that Ben does not think the relationship is important. Women like to use their imagination to link things which are actually not related to each other to make a judgment. But in fact , not many things are related in a way as women think. For example, my sister-in-law was very unhappy with my brother when she saw a message which was sent by a woman at midnight. She thought there was danger in her relationship and she cried. But in fact, the woman who sent the message was just a sales person who wanted to sell insurance to my brother.

Fourthly, don’t be over too aggressive in a new relationship. Andie invites Ben to sit beside her on the bed on the first night they met. Ben thinks it is too unnatural and too fast. He is not ready to get intimate with Andie on the first night they meet. Another time, Andie says that she wishes that she was not a vegetarian after Ben spent hours to prepare for a beef dinner.

Last but not least, don’t be too selfish and not care about man’s feelings. Ben was a fan of baseball but Andie kept asking him to buy her a coke during a baseball game. Ben wanted to watch a baseball game for the night, but Andie asked him to accompany her to watch Céline Dion’s concert.

A good relationship is that people have compromise on daily life. Respecting and understanding each other is also the key.