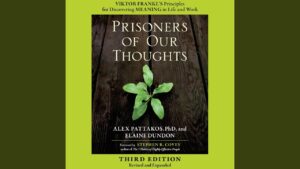 This is the book my friend recommended to me after reading “Man’s Search for Meaning”. Dr. Viktor planted a seed for each of us to search for meaning, and the seed has grown strong and big, and now the vine has spread over the globe, including to Alex Pattakos, Ph.D.

Alex wrote this book “Prisoner of Our Thoughts” after Dr. Viktor’s 3 ways to find the meaning of life:

Alex summarized 7 principles from Man’s Search for Meaning, which are:

I am impressed by the way Alex summarized Viktor’s book. I would like to pick some of his points to share my own reflection. There’s one thing we may not have realized lots of times; we are the prisoners of our own thoughts.

Principle 1: Exercise the freedom to choose your attitude

Sometimes people may not be physically free. However, the freedom to choose our attitude is a freedom always there.

Nelson Rolihlahla Mandela, the first president of South Africa, was imprisoned at age 44 and was 72 years already when he was set free after 27 years.

On the day Mandela was set free, and it was broadcast on TV. President Clinton, at that time, wanted to know whether Mandela would be hateful when watching his release on the screen. However, Mandela chose not to hate those guys who imprisoned him. Nobody could imprison his thoughts, whether he was in prison or out of it.

I was thinking, how can 27 years of life, almost ⅓ of Mandela’s life, be something he can choose to leave behind and not be mad at?

I know a woman who remained hateful to her brother for almost a decade, as she thought she was not respected and misunderstood, no matter how her brother wanted to repair the misunderstanding. I talked to her once, and she shouted at me and asked me to leave her alone. She believes she is a victim of a family argument.

If we don’t learn to let go, we are imprisoned by our thoughts, just like the woman I mentioned. On the other hand, if we learn to forgive, we not only forgive others but also forgive ourselves.

What I saw from Mandela was that his thoughts did not imprison him after he was physically set free, but he roared and put himself into a bigger landscape. He negotiated with State President F. W. de Klerk to end apartheid in South Africa, bringing peace to a racially divided country and leading the fight for human rights around the world.

Another famous person is Stephen Hawking, an English theoretical physicist and cosmologist. At the age 21, Hawking was diagnosed with an early-onset slow-progressing form of motor neuron disease (amyotrophic lateral sclerosis – ALS, for short) that gradually, over the decades, paralyzed him. After the diagnosis, people thought he would live for 5 years as that’s the usual number of years to live after an ALS diagnosis. However, he lived with ALS for 55 years.

After the diagnosis, he did not choose to live a life waiting for his life to end. Instead, he devoted himself to physics and contributed hugely to the physics world.

He worked on the physics of black holes. His discovery has made the detailed study of black holes possible. He also wrote best-selling books, the most famous of which was A Brief History of Time: From the Big Bang to Black Holes (1988).

Through the lives of Mandela and Hawking, what are the attitudes we shall choose when we have got stuck in our lives? Will we choose an attitude that others can widely accept by taking pity on ourselves or can we break through the pity?

Principle 2: Realize your will to meaning & Principle 6: Shift your focus of attention

I have some friends who are parents of middle school children. One of their goals and the goals of their children is to push them to the top global Universities.

In their minds, sending children to top-tier universities and working for a worldwide top company is the version of a successful life for their child and for them as a parent.

And on the other end, the fathers believe that earning as much money as possible for the family is the only choice they have for their family. Then fathers sacrifice their family life and stay separated from their families and become ” astronaut ” parents most of the time; they fly to the country to gather with their family and children for a couple of days, then go back to their work.

From the two examples above, what is the meaning of life? People may have success in their friends’ eyes, but they are not happy and fulfilled.

A famous saying by Socrates is, “The unexamined life is not worth living”. Have we truly looked into our inner hearts and understood what the true meaning of our lives is？

Principle 5: Look at yourself from a distance

This is also a prison we can easily fall into. Lots of times, we are critical of ourselves.

Plastic surgery is a way to improve the appearance and gain more confidence in daily life, especially for people whose career requires high standards for their appearance or those who have defects, and the surgery can make them feel better. However, I don’t think people need to get repeated surgery on themselves.

If we learn to look at ourselves from a distance and jump out of the thought prison, we may find we don’t even need to consider getting plastic surgery as we are good-looking overall.

Principle 7: Extend beyond yourself

The last principle I would like to mention is to extend beyond ourselves. The key word is “beyond”.

There are lots of times when we think that something is beyond our capabilities. However, it might not be. I have some female friends who said they could not cook well for their families. I asked them why, and they said they weren’t good at cooking.

I do believe cooking is not something everyone enjoys; however, do people believe they are incapable of cooking or do not want to cook? That’s a big difference there.

I told my friends that swimming could help ease my back pain. However, my friends said they could not swim because they had never learned to swim. Is that something you want, or have you tried but are not capable of after 10 or 20 times of trying? In fact, I took 2 courses, and I learned to swim after the 2nd course.

Mandela and Howkings are inspiring examples; they can go beyond themselves. Mandela chose to forgive the people who sent him to prison for almost 3 decades. I know this is something many people won’t consider choosing. However, that’s a choice lying in our options list.

Hawkings could have chosen to live up to 5 years and spend the time on whatever he wanted, starting from age 21, the age he was at the time of the diagnosis. However, he did not. He chose to go beyond an ACL “patient”, and be a physicist.

For anyone who really wants to do something well, just work on it. Do not say, “I can’t because I am not capable of XYZ”.

If I can give another example, Nick Vujicic was born without limbs in 1982. He does not have legs or arms. He has two toes.

After a COVID-19 shot, I thought I could not do anything as my arm was so sore. However, Nick can do everything and more things than a normal person can challenge. He did horse riding, swimming, drumming, soccer, and surfing…

He is also a world-renowned speaker, New York Times best-selling author, coach, and entrepreneur and has 4 beautiful children and a lovely family.

He has a book named “Life Without Limits“. I highly recommend that you read it and think about what limits you have put on yourself in your life.

Finally, I think we need to set ourselves free if we realize that we are prisoners of our thoughts and remember: