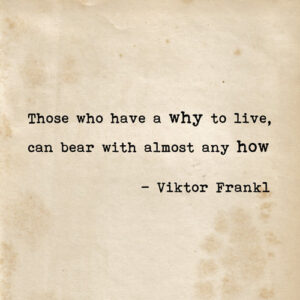 Recently I read my 16th book in 2022, “Man’s Search for Meaning.” It was not an ordinary read for me. But, it was a big inspiration in my mind and heart.

The author, Viktor Frankl, was one of the few survivors of the concentration camp during World War II. According to the statistics, an estimated 17 million people were murdered by the German Nazi regime. And more than 1,000 concentration camps were established during the history of Nazi Geremaning, and around 1.6 million people were registered prisoners in the camps. Around a million died during their imprisonment (source： Wikipedia）

It’s very heartbreaking to learn about the historical holocausts in the world, including the Nanjing Massacre in China. This is something I tried to read less of, as I didn’t want to face the cruel history of human beings.

One day, I happened to watch the movie “The Pianist .”The movie is a biographical film inspired by an autobiography, the Pianist, which is a true story of one man who survived World War II’s holocaust. This movie opened my eyes to the evils of the world, and I started to learn about some dark historical moments.

Frankl stayed in the concentration camp for almost four years. He was separated from his family, including his parents, brother, and wife, who were in different camps. In prison, missing his wife, the imagination of the family reunion was one of the most important thoughts during the harsh situation in the concentration camp. Another meaning for him, he mentioned, was to finish writing a book after he got released and tell the world what he discovered, which is the meaning of one’s life, even from such an experience.

“Those who have a ‘why’ to live can bear with almost any ‘how’,” Frankl mentioned a few times, quoting Friedrich Nietzsche.

This is so true. Nowadays, lots of people have “earn more money, have a successful career” as the “why to live,” then after some of them have lots of money and success, they don’t know “why to live” afterwards.

Some people feel they have lost the meaning of the “why to live” after they achieve material success; they may start to use drugs to make themselves happier, as they can no longer find happiness in their everyday life. Some of them commit suicide as they feel empty and not connected with the world.

Frankl writes: We can discover this meaning of life in three different ways:

There are lots of inspirations from the book, I have picked a few that impressed me the most:

1. Frankl kept good habits, no matter how awful the environment was.

Just imagine, he was in a room where inmates died everyday and corpses were in the room. At night, after a day of heavy labour, he slept on dirty blankets with holes and lice, However, he still tried to remain clean and shaved every day.

At that time, lots of prisoners missed their wives. They hoped their wives lived better in the camp than themselves, and they didn’t want their wives to see how awful the situation was so they could feel better. Frankl also thought of his wife, so he used that memory to accompany him during his loneliness. “The truth—that love is the ultimate and the highest goal to which man can aspire,” Frankl mentioned.

3. Frankl mentioned, “The more you aim at it and make it a target, the more you will miss it.

For success, like happiness, cannot be pursued;” The prisoners were afraid to make decisions, as they thought they made a safer choice to go to a better team; however, they could be expedited to death.

I cannot agree more. I also think the only things we can control are ourselves; there are lots of things we cannot control in our lives.

As parents, we sometimes want to control our children, hope they do what we hope. I had hoped my son would read more but he still does not like to read. (Maybe one day he will change, lol)

Every athlete who participates in the Olympics wants to be a champion, I believe, but only very few can win first place.

I did not mean we don’t try our best and make efforts; I am more a believer in trying our best and making efforts as only we can control ourselves, leaving the result to be determined.

4. At any time, we should try our best to keep our spirits strong.

For this environment in the book, prisoners who have the confidence that one day they will be set free, have a higher chance to stay alive, than those who don’t.

There are lots of scientific articles that cite that the more optimistic people can stay, the more chances for people to stay well and heather. Frankl mentioned there were lots of people who died around the Christmas of 1945. The reason was that lots of prisoners strongly thought they would be set free and go home for a family reunion that Christmas; however, it did not happen. People lost their hope and so their spirit. Their bodies deteriorated after the spirit got stricken. Their immune system could be easily broken into at that time and people died from disease; the series of events began from losing hope.

One of Frankl’s inmates strongly believed March 30 would be the day for freedom as he dreamed about it and it was a specific date in his dream. The inmate lived well and looked forward to March 30. However, it did not happen on that day. The inmate got sick and died soon after, as he lost hope.

“That which doesn’t kill me makes me stronger .” Frankl quoted Friedrich Nietzsche.

I remember I had a relative; who was of a similar age to my dad. He had a comfortable life after retirement. He had a good retirement plan, and his children cared for him well. He traveled to lots of places, and he was very happy.

One day, his son sent him a gift, which was a comprehensive paid medical checkup. This is one of the ways for children to care about their parents in China.

The goal was to keep people better-advised and result in a healthier life, it will also help people to avoid a wide number of diseases and catch any signals early on.

However, one of the results was that he was detected to have lung cancer, in a very early stage from the body checkup.

Since he was told that, he could not sleep and eat well. He had been worrying about his death, although people told him there was a high chance of survival after treatments since it was quite early. However, he carried the burden of thinking of death every day. He died because his immune system broke down in the 3 months after knowing of his cancer as he could not sleep and eat well. The doctor said he did not die of cancer but died of stress.

5. After being released from the concentration camp, Frankl became a psychiatrist who founded the field of logotherapy.

Logotherapy is a therapeutic approach that helps people find personal meaning in life. He helped lots of people to discover their meaning in their lives. Lots of patients recognize they cannot live without meaning.

Lots of people don’t know the meaning of living. People feel empty after being busy for years in their lives. One day people suddenly don’t know what their life’s purpose is. For example, people could not feel their value after being laid off during the great depression. People feel empty after they retire as they cannot go to work anymore, the daily routine got a big change. Or there’s a symptom for moms after their children leave home for university “empty nest syndrome,” as lots of moms spent two decades of their lives around children.

In my opinion, everyone needs to discover their meaning in life. There is no right or wrong meaning or levels of different meanings. As we only can live once in the world, if we don’t know our meaning, we can carry lots of regrets before dying. (Note: I read the book “The Top Five Regrets of the Dying” in 2019. The author Bronnie Ware was inspired by her time as a palliative carer.)

What is my exploration of meaning in my life? This is what I found so far: