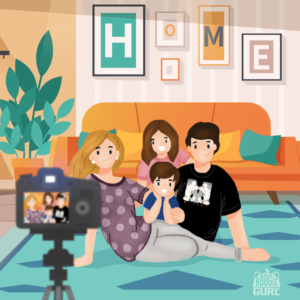 The topic is family life.

One day I opened my WeChat. I saw lots of my friends traveling with their families in China as it was a seven-day long weekend- labor holiday in China from May 1 to 7. I saw friends’ pictures of family, kids, parents, and couples. I could sense a phrase called “family time”. I was happy for them.

However, in Vancouver, starting from the summer of 2013, I have a ⅓ of my family here. My family means myself and my son. The other ⅔ of my core family means the spouse, parents, brother, son’s grandparents, and grandma are all in China. I am not alone, and this is a new symptom for immigrated Chinese since the 21st century.

This symptom I will call it, New Era’s Chinese style immigrants. Starting from the 21st century, more and more Chinese families choose this model to immigrate: the wife and kids stay overseas, and the husband, as they are the breadwinners, stay in China. The husband is now called an immigrant astronaut. The husband flies between China and their family. The popular countries for immigrants are Canada, America, Australia, and England.

Before the 21st century, the way Chinese people immigrated was they first went to another country like a labor export, and they went to another country, such as the USA, to work. They earned US dollars, and they sent money back to their home in China. From the economic point of view, at that time, even a blue-collar worker in the US earned dozens of times more than a white-collar worker in China.

There is a famous novel, which was turned into a famous TV series in China. The book is called “A Native Of Beijing In New York. ” The novel is set in 1994. I haven’t watched the TV series myself, but I checked the story, and I know the story is about a couple from Beijing. The husband is a violinist working in a band in Beijing. At that time, there was no Google, and the world didn’t talk about globalization. People in China had only heard about New York from other people or information on the news or movies. Many Chinese could not afford an airfare ticket to another country to discover what the world looked like.

Back in 1994, the hourly rate for a restaurant staff member such as in McDonald’s was USD 4.25 per hour in the States. Let’s do some quick maths here. If staff in McDonald’s worked 30 hours a week, that means their monthly salary was around USD 892.

However, an office clerk at China’s average monthly rate earned RMB300, which means $USD35 per month. Everything in China was very cheap compared to today. People could have a stable life if the couple could have RMB600 for a family, which meant $USD70 a month. Of course, most of the spending was on food and living. You can imagine, very few people in China could afford a private car at that time.

By saying that, it’s not difficult to understand why lots of Chinese people wanted to leave their families behind and go to the States to work 25+ years ago.

Starting from the 21st century, the Chinese economy has been in rocket mode, and the average GDP has increased year over year, and it has become one of the fastest GDP growth countries in the world. People’s life quality is much better, and it is far beyond the “eat well and dress warm” era.

Chinese people had been traveling around the world before the COVID-19 breakout. Many popular places such as Western Europe, North America, Japan, Dubai had lots of tourists from China. According to Business Daily, in 2019, Chinese tourists went to 158 countries every year. They were a significant contribution to the tourist economy.

Those Chinese tourists brought a considerable boost to those countries. Not just because they needed lodging, dining, and transportation, but also they spent a lot on shopping, from the average person spending USD 1000 to USD 2,800 per person in 2020.

Chinese people have moved to a high-quality lifestyle from the old model. The current Chinese economy is more leaning toward higher quality, more personalization, and diversity. My parents were born in the 1950s; their lives still needed to deal with lack of nutrition, and people could not afford nutritious food. Most people in China at that time were underweight because of a lack of good food. Due to food being the priority for a human being, there was no money to spend on other things. My grandma told me she made clothes for children by using towels as towels were cheap at that time.
However, Chinese people are now caring more about losing weight and how to have a healthier and more balanced diet. Newspapers in China have talked about “How to deal with over nutrition” for years since the 21st century. Gyms, fitness classes, nutrition lessons have been in hot demand as lots of Chinese people now have to think about how to lose weight and have a healthier life balance. It’s normal that an average Chinese family in the top 10 tier cities has two private cars for each couple.

China has changed a lot in the last 20 years. But because of the historical memory and momentum, people still think China is a less developed country based on lots of Chinese memories. They hope their kids can grow up in a more developed country. Chinese parents have been sending their children and spouse to another country, and since then, the family has to live in such a separated mode for years or a dozen years.

I have been thinking back to the old days in China and Chinese values. Chinese families value big family life. There are three generations or four generations that are a symbol of a pleasant family structure. After I read more and listened more, it’s not just Chinese people. All people in the world value family, and family is one of the most critical parts of a person’s life.

However, because of several top reasons and the historical memories, nowadays many Chinese parents send their kids to another country, in order to pursue a good quality of life and have less pressure for kids to go to school due to heavy homework, or live in a better environment. A lot of Chinese families sacrifice their family life. I am not talking about a short time in life; lots of people spend a few years going to university and leave their families, which is normal. I am talking about the separation mode for 5+, 10+, or even 15+ years. I saw some families that have been separated since the kid or their first kid was three years old, and until the kid goes to university at age 18.

In my opinion, sometimes people don’t know what’s most important, one single thing for their kids, for their spouse, or themselves. That single thing is family life, period.
They put those attributes, such as environment and school, as the most important reasons for the separation as the exchange. Lots of husbands lost many years of happy married life, and lots of fathers lost many years to accompany their children, and lots of kids can only see their father on video conferencing or see them 1-2 times a year. The husband or the dad is a missing piece from a family photo. Is it worth the exchange?

One day, back to 8 years ago, one of my Canadian friends asked me, “Why did you get married earlier if you knew you and your husband were not going to be together?” At that time, I said, “Lots of Chinese families are like mine.”

Now I seriously ask myself, and maybe lots of you, wives/husbands can ask yourselves, is this worth it? If you could turn back the clock, would you rather stay as a whole family? When you are in your 80’s or 90’s, will you regret the time you lost for family time?