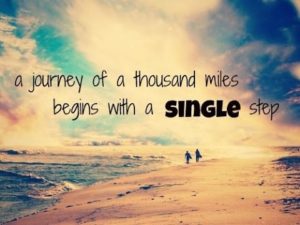 Recently one old famous phrase popped up in my brain several times “A journey of a thousand miles must begin with a single step”, it is from Lao Zi, an ancient Chinese philosopher, and writer, in Dao De Jin.

When I was young, this old phrase was always mentioned somewhere, sometimes by my grandpa, who was a middle school teacher and taught Chinese; or it got mentioned by my teachers, or quoted by my classmates in writing. The phrase was just too famous so it was easily seen somewhere in my life. Generally, the more familiar we are with something, the more our brains get used to it. As a result, we won’t pay any attention to it.

Recently another phrase jumped into my mind; one day, I saw a phrase in an article: “You won’t win the game if you don’t enter”. Although the two phrases look quite different, and they were mentioned a thousand years apart, by totally different people, one by a Chinese philosopher and one by a western blogger, they have similarities.

One day I was triggered by one of my friend’s son, who just started his first year at his university. He is a freshman, but he wants to work for one of  the top 10 technology companies when he starts his first co-op application in his life. His father told me, ”It seems like a high goal for a 1st year university student.” I smiled and used the phrase and replied, “You won’t win the game if you don’t enter it”.

Our minds are used to being bound by so many stereotypes, which limits our potential, and it leads us to have a closed mind. We dare not to have a bold dream due to the closed mind pattern.

I happen to have a close person, who is my husband and he has that closed mind; he usually says: “That’s not possible” and his mind has a lot of “impossibilities”. I have practiced the “anti-impossibilities” through the years.

One day John told me that he had reached his limit playing the piano. I know sometimes skill learners need a break, and sometimes they think that’s the ceiling of their skills. Then I bought a book named “Life without limits” by Nick Vujicic, who was born with no limbs; he turned lots of “impossibilities” into “possibilities”, even beyond people who are healthy and sound. Nick is skilled at surfing. I haven’t thought of having this skill in my life.

I told John that the limits are far beyond our imagination, and actually, there are lots of “fake” limits and ceilings.

Back to my friend’s son, who said that freshmen university students cannot aspire to working for the top companies in the world. Actually, as long as he takes the first step, anything can happen.

My personal experiences also remind me of this old phrase “A journey of a thousand miles must begin with a single step”. Sometimes John found it’s so difficult to get up in the morning at 6:45 to catch the school bus, I told him that if he took the first step by counting to 5 and then sitting up, after 1 minute or 2, he would go to do his morning routines and be ready to go to school. If he didn’t take the first step and sit up, he would find it’s impossible to get up, especially on a winter morning.

When I go swimming in the winter morning, the first minute I walk into the swimming pool is the hardest as the water is almost 10 degrees below my body temperature. After that 1st minute, my body gets used to the pool temperature. That means that us human beings can quickly adjust to new environments and changes.

I mentioned that I learned a few new skills in Vancouver, including learning swimming and playing piano in one blog “How many fears have you conquered?” I would like to share with my readers some examples of the first steps I took in the last 5 years…

My first step to learn swimming

I told my friends that learning swimming was not that hard after I started my swimming lessons. I used to be afraid ‘to death’ of water in my eyes and nose, when I was young. My two good friends reached out to me as they were interested in learning to swim as well. After a few days, one friend said that she thought about it but she wouldn’t make the first single step to reach out to the coach as she still had concerns; another friend did reach out and took 2 lessons, but she stopped going as she thought it was not safe although the pool is only 5 feet deep and she is 5.5 feet.

Now swimming is one of my exercise routines on a weekly basis, and it helps my neck and back problem a lot.

My first step to start this blog

Before I started this blog tabithatao.com I never thought I was the kind of person who could write. I used to write diaries when I was in middle school as my good friend bought me a beautiful diary book as a birthday present. However, I stopped writing as I actually didn’t enjoy writing. My excuse was that I had enough writing assignments from my school. I knew I simply didn’t like to write!!

It was not until I started to go to the MBA school in Vancouver, I had to think about picking up writing again. I knew I had a capstone project at the end of the MBA program. The capstone consists of lots of writing.

After rational consideration, I told myself and I bit my teeth, that I had to start writing. Otherwise, I could not graduate.

The first step I took was that I went to an advanced writing class at Simon Fraser University. However, after a few classes, I was told that I should not be in that class as my writing was not “advanced”; they could not teach ESL (English as the Second Language) students to write in that class as it was not the objective.

I realized that I was in the wrong class. However, I finished the 10 classes and continuously went to the 3 hour classes in the winter evenings after work.

What should I have done then? I tried other ways: I found a private tutor who was a retired English teacher. After a few writings, I told myself, I had to start writing more regularly, I knew practice is like building muscle, (although I hadn’t started to work on building muscle I knew the theories, lol). I started my blog and tried to write one blog every month. After 5 years, I had written 86 blogs. Now I don’t feel I am an ELS writer anymore. The beauty is that, after I graduated from the MBA in 2016, I actually started to ENJOY writing. Since then, writing has never become a task: it’s part of my life.

I never thought I would spend time on learning piano while I already have a very busy life in Vancouver (a full-time job, almost like a single mom with my son -as most of the time my husband is in China, plus my reading, swimming, continuous on-line learning & cooking routines, etc)

The first thought that came to me was when I was sitting in my son’s piano class in 2016. The teacher asked me to play some simple notes with John at home, as they were doing a Piano Duet with 3 other students. I was embarrassed at that moment, I was thinking, “Did I look like someone who could play some simple notes on a piano? I could not even read music!

After that, my good friend invited me to her home to have dinner, and she told me she was playing some piano at home. I was thinking that I should learn something as well. At that time, I didn’t push myself to take the first single step.

I was thinking, “It’s time for me to make the first step to learn the piano now. My son may have an interest in joining me if I play the piano and make a sound at home.”

Then I registered for an entry-level piano course and started my first step in the summer of 2018.

I realized that learning piano was kind of repetitive and full of frustration in the beginning. One evening, I practiced one piece more than 40 times but I still made all kinds of mistakes. I was angry with myself and then I thought that no one required me to play the piano. Why was I doing this? Moreover, John did not change too much after I made sounds on the piano, anyway.

However, one day the piano teacher said that for pianists, they usually need to practice thousands of times on a piece but they can still make mistakes during the performance.