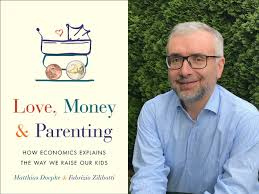 Recently I have been reading more books on parenting; as a teenager’s mom, I feel I need more intelligence to have a smoother relationship with my son John. Hence, I started my reading journey on parenting books.

Although the book “ Love, Money & Parenting” is not exactly about how to be a good parent, it’s about the evolvement of parenting style from a worldwide perspective and how economics explains the way we raise our kids, but it helps me to identify where I am and what other parents are doing at the same era. The book helps me to be aware that although we are in different parts of the globe, parenting is not done alone, and it’s not as complicated a subject as I thought. There are a few new things I learned from the book.

1.The root cause of conflict between parents and children;

In the beginning, it revealed the simple truth that most of the time, the conflict between parents and children is that parents not only care that their children are happy in the present but also in the future. Parents hope they have an excellent career, long term physical & mental health, and fulfilling life. However, children put more weight on having fun in the present.; although parents and children disagree on lots of things, this root cause stands out.

It is so true, for example, that in the digital era, online video games are more fun than the static video games I used to play when I was young. Today’s video games have the functionality of entertainment, self-satisfaction due to lots of rewards, and social connection (due to the fact that friends can hang out online on the game). I know video game manufacturers have done a great job of making video games more alluring and addictive. Lots of video game companies make significant money from users. The value chain not only includes the content provider, software development, platform provider, manufacturing services, distributor, retailer, but also has an extended value chain, such as the broker and agent for the video game player, which is called a streamer, to attract the video gamer.

Hence, there is the frequent argument between parents and children that children want to play games, as it can satisfy their present need and make them happy at the moment; on the other hand, parents know that video games are just for the present, they do not help their future. However, kids cannot realize it due to their brains not being well developed before being 25 years old, and they cannot think about the long term.

My original question was, what kind of parenting style do I have and what style is the scientifically proven one. Which is best for children? I found the answer in the book.

My parent friends all feel that there is no manual to be a parent; everyone only has one or few chances throughout life to be a parent. Lots of people learned parenting skills from their parents.

In the years before 1970 or even the 1980s, being a parent was not so complicated as the society had more equality, and people had similar wages, so parents didn’t concern themselves about their children’s careers and future. According to the book, the root cause of different parenting styles is the inequality of economic status, which will be mentioned later here.

The book reveals the answer based on the analyzed data that the 3rd style, which is the Authoritative parenting style, is the one which helps children to perform better in school, be more confident and positive, and have higher self-esteem.

Here are the four types of parenting styles:

According to the book, this 3rd parenting style is the best; the children get the best result from this style, which usually means the children have better school performance and are more confident and capable of dealing with difficulties.

3. What is the root cause of the four parenting styles in different countries?

The book points out that the root cause is the inequity of economic status.

It is mentioned that in China, under the Sui dynasty (605), the nation-wide imperial exam, called Keju, became the standard procedure to select the new generation of government officials for 1300 years; Any men throughout China could take the exam, usually starting from teenage. The benefit of the exam was very straightforward; the higher the results from the exam, the higher the level of office the examinee would get.

In the early 1970s, the average wages of the rich and the poor were about the same; it was the same in China, according to my parents, most people received wages, which did not differ too much from each other in the 1970s, or even until 1990;

However, starting from the 21st century, in early 2000 till now, the rich and the poor in the US has widened according to The Business Insider https://www.businessinsider.com/us-income-inequality-record-high-generational-wealth-2019-9 The same trend exists in China.

Thus parents nowadays are more concerned about their children’s future. Parents know that if children don’t get good grades, they will end up not being able to go to a good university. The result could be that their children can’t get a decent job with a good salary;

However, it’s also mentioned that in some countries, such as Norway and Sweden, parents are not concerned as these countries have good welfare systems; the inequality gap is not significant.

4. Like any learning’s, there are also Good practices for parents

I will add to that, the more engaged a family is, the better involvement the children will be. It’s not good for children to live shielded in a greenhouse, which is delicately watered and taken care of. The more children are exposed to some family activities or community activities, the more understanding the children will be. Through those engagements, children will be more likely to develop knowledge, empathy, caring, and engage with the family and society. Otherwise, children could be too fragile and self-centered, as they are less involved.

5. Worldwide view of the parenting style
For countries which have high inequality, such as the US, China, Turkey and Russia, hard work is praised more; for countries which have low disparities, such as Norway, Sweden, Switzerland, they think that happiness, innovation & independence of their children is essential; Japanese children run errands for the family at an early age as parents think it’s important to be independent.

American and Chinese parents are hovering like helicopters, while Germany & Switzerland have relaxed parents;

Parents from the US & China value the saying from Einstein: Genius is 1% talent and 99% hard work. As the gap between the rich and the poor is huge in the two countries. In US Major cities such as New York, Los Angeles, Chicago, Miami, as well as major cities in China, such as Beijing, Shanghai, Guangzhou, Shenzhen, Hangzhou, the poor and the wealthy have a significant gap.

John and I went to New York in November; we went to visit the place where the movie Joker was shot called the Bronx. We could not believe that after a 20ish minute Uber ride, the place where Joker lived was another world from Manhattan.

We stayed in a hotel in Times Square when we were in Manhattan; I was so impressed by the very highly civilized city I saw. The buildings were taller, the streets were busier, the crowded neon lights were twinkling, billboards advertised luxury goods, and people were everywhere.

The hotel in that area was $300+ per night, even two bowls of ramen cost us $50 and more. However, on the street, some people performed late in the night in the cold weather and tried to earn 1 dollar or 2 in the packed audiences.

6. Cost of money and time of different parenting style
Without surprise, the 3rd parenting style, has the most investment in both time and money as it’s a type of intensive parenting; to send children to elite universities in the US, the children not only need to have good grades, but also be outstanding in other areas such as music, enrichment classes, sports; to send their children to the high-quality enrichment classes, parents need to spend time by driving their children and picking them up, as well as spending lots of money; in recent years, the hourly fee has been dramatically increased for those classes; I heard from my friends in China that, the hourly cost for a private tutor for TOFEL test preparation in the SCRAM schools is as high as RMB 1400 per hour, which is close to USD200 per hour; one class usually is 2 hours at least, and the trend is still going up as the demand is higher than the supply;

Thus the gap between the poor and rich is being widened more due to the affordability from parents;

7. Different parents
The stats revealed that there are other differences between parents.
The well educated upper-middle-class parents engage more with their children; single parents have less involvement with their children, simply because they have too much on their plate so less time can be spent on parenting;

Other elements caused the differences between parenting style, such as income, wealth, religion, race and education, children’s gender;

8. School systems also play a significant role, such as in China, France, South Korea, and Turkey, the entrance exam to university has high stakes. Hence, students need to work very hard to get the best grade possible in the exam; then, they can be admitted by the top universities.

In the US and UK, parents think extracurricular activities are an essential part of their children’s resume, which will help them to gain admission to top colleges and universities, besides perfect grades; that’s why in the US, lots of children have not only good grades, do lots of reading, but also have outstanding performance in something else, such as art, music or sports.

The more parents push their children to be successful, the higher the chance the children will excel; Due to the widened gap between different classes, as long as there is a big demand for extracurricular activities; parents will still push hard for their children’s success; as parents know only by doing so, can their children have a higher quality life and more successful career;

On the other hand, nowadays, parents have a challenge which is lying in front of them, it is that their children live in an anti-robot era. Lots of jobs will be taken by robotics. More repetitive, low skilled jobs, plus some high skilled jobs in, for example, in banking and medicine, will be replaced by robotics;

However, robots cannot replace those jobs which have more sophisticated knowledge, which require lots of interpersonal communications and emotional connections, robots are still being programed by humans but cannot be programmed to have the human’s emotions;

Top universities also need to adjust their education services to be “robot-proof”.