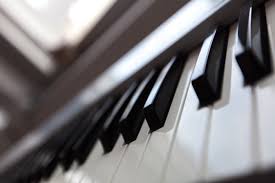 After 3+ months’ piano learning, I graduated from the beginner’s class last Sunday. Today Sunday, January 19, 2019, is another milestone for me as I am going to be in the mid-level piano class.

Last September, I started my piano learning, which was an add-on of my 2018 goals. I admired John’s piano playing very much. (He is now working on his piano level 10.) I loved most of the pieces he played.

“Why not try piano and play the pieces I love for myself?” One day that idea came into my head. But can I still learn it as an adult? I was wondering if my two hands could cooperate well. And it does not seem like an easy skill at all.

On the other side, a different voice occured, “You learned swimming last year, which was a daunting goal for you since you were fearful of water for years; you can do it this time too!” I  struggled with myself and couldn’t made a decision.

One day, one of my good friends, Susana, told me that she had been going to a piano class in Richmond called SXT, for a while- the piano class is designed for adults.

That is a great idea!! I reached out to them and registered for the beginner’s piano class without hesitation. The class started in late September 2018. In the beginning, there were around 20 students in the class. In the first class, the instructor, Jane, said that according to her experience, usually, there would be half left in the end.

I was wondering who are those students: the self-motived ones who were eager to learn a new skill? Very soon, what the instructor said was proven true. Starting from the 4th class, there were students who asked for absence because of the conflicts in their lives. The instructor told them they could make that up as the materials and pieces would be published on the Wechat piano class group. In the beginning, it was easy to make up a class, but it got harder in the late half of the courses when the content became more difficult.

One classmate reached out to me and asked: “Don’t you think it’s getting harder and harder now? How can you play well?” I looked at her and told her there was really no secret; I was practicing 30+ mins every day, and I asked her how her practice was going at home? She sighed and said: “I can’t practice at home as I play the wrong notes all the time. The more mistakes I make, the less practice I dare to do.”

The reality is, the more time they spend on practicing, the more difficult it seems to play well, and the more frustrated people will feel.

As a result, I saw fewer and fewer students in the class: at the end of the course, there were less than ten students-which was about half of the students.

I read a blog yesterday, which is the weekly blog from Robert Glazer’s Friday Forward. He mentioned that

“Most of us want change to happen overnight. As such, we tend to lose patience waiting for our efforts to produce results. The reality is that lasting change manifests from compounding effort; doing or not doing small, seemingly insignificant things every day. And this takes time.”

He also mentioned “The 1% rule with James Clear, bestselling author of Atomic Habits.

I read Robert’s blog every Friday, and I can’t agree more with it. Most of us set a goal to do something, but some people lack the patience to stick with it.

My cohorts in the piano class all wanted to learn piano in the beginning as they saw the other graduates play so well and some of them even perform in public. In the beginning, I believe all of us want to learn from a self-motivated goal.

But it is not fun to sit in front of the piano and practice the pieces every day as the pieces are far away from the pieces you eventually want to perform. But the truth is there’s no shortcut to the day you have been dreaming of if you can’t commit to practice only 30 minutes every day or make 1% of daily improvement.

When I was a child, I always heard some parents talking about some brilliant students. They always said: “That was a brilliant student, but regretfully the student was just not hard working.” Sometimes people are dreaming of being lucky overnight by winning a Lotto or Powerball game overnight. But according to the CNN, the odds of winning the first prize are usually 1 in 1 in 2-300,000,000. People typically do not realize that just by working hard they have a much higher chance to reach their dreams or improve their lives.

I watched the movie “The Social Network” with John last year. One day  I asked John that if he noticed that Facebook’s founder, Mark Zuckerberg, was a student working hard on his dream. Other classmates went to parties or social events in their spare time; Zuckerberg was one of the few who stayed on his dorm and worked hard on his initiative network – which later became Facebook.

There is a Chinese saying “Fortune always favors the hardworking ones.”

And hardwork is one of the ultimate secrets for most of the people’s successes.