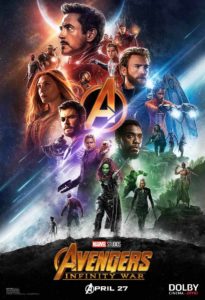 It’s been a while since I had a movie night with John. I would like to have some type of “mom and son” time with John; however, recently his interest has been playing games which is something I can’t follow. I used to play Super Mario when I was a child, but I usually died soon after game 1. I had to watch my brother play from game 1 to the end almost every time.

After watching all the Harry Potters, he started to switch to the Marvel series. The Marvel Cinematic Universe (MCU) films are an American series of superhero films based on characters that appear in publications by Marvel Comics (from Wikipedia). There are lots of famous superheroes such as Spiderman, Ironman, Hulk, and Captain America.

The most recent several of them are Avengers. After watching them, we discuss which character John likes most and why. I will also tell him who’s my favorite character. For example, John told me he likes Vision most as he is fair, just, calm but super powerful. I told John I like Thor because he is very courageous, fearless and loves and hates distinctly. I know there’s a long list of Marvel movies waiting for me to watch with my son.

On the other hand, I usually choose some movies, which are from real life and inspiring. As I mentioned before, most of the movies from my list are some from real life such as The Social Network, Pursuit of Happiness, Homeless to Harvard, Rise of the Legend and Forrest Gump…

No matter which movie we watch together, I want to show John how people in real life experience things differently and how they work hard and work all the way to where they are later. I want to show John no matter where a child is born, it’s still persistence, and self-motivation that makes them different to their peers.

It’s also a type of love from Mom, John.