Say goodbye to my wisdom teeth

August 8, 2015 was a special day for me .I had to say goodbye to my four wisdom teeth. It was a nice Saturday morning. The weather was nice. Everybody on the street was enjoying their weekend, except me – I was going have my four wisdom teeth pulled at once, at 11am.

I hadn’t dealt with dentists a lot in the past since my teeth were all relatively in good condition and they hadn’t bothered me in the past. I only visited the dentist once a year when I needed my teeth cleaned. Starting from 2013, a dentist suggested pulling out all my four wisdom teeth since they were growing closely toward my other teeth. They would squeeze them sooner or later.

Every time I shook my head and said, “I will consider it” to the dentist in reply to his suggestion; then I fled. I am not a person who is brave and bold enough to handle small operations like this. On the contrary, I always want to avoid going to the hospital, especially those opportunities of facing a needle or blood drawing as I am a person who is really afraid of seeing blood and needles.

I had to seriously think about my wisdom teeth this time. It seemed that I couldn’t flee anymore, as I had to do something about them this time. After two days, I decided to have them pulled out so I would be worry-free forever.

In July, I visited the dentist and he took a full picture of my wisdom teeth. After that, I made an appointment with him for August 8 to have the minor operation.

The week before the operation, my colleagues told me several horror stories of their experiences. I also remembered that my colleague M had a full week of soup after having his four wisdom teeth pulled several months ago. He also had low-grade fever and stayed at home for several days.

“Oh you can’t come to work on Monday since you will feel weak and horrible after this operation. You’d better rest at home or work at home.” My manager said. Would the operation be that bad? I was wondering.

Two days before August 8, I announced on Wechat (an equivalent of Facebook in China) that I was going to eat 4 meals the day before August 8. I didn’t know how soon I could eat normal food after the operation. After the post, lots of my friends replied me and they said: ”How can you get your 4 teeth pulled at once? It is too risky for you to do it. You should get 2 pulled at once and another 2 next time.” “We haven’t heard of any people having four wisdom teeth pulled in China; you’d better check with the dentist if it could be too risky.” “Pulling wisdom teeth is also a type of operation; you’d better be careful instead of being bold….” My husband was strongly against it. He thought I was crazy.

Finally I decided to keep the appointment.

Gladly I had 3 friends who had similar experiences and they all did quite well. Their stories gave me lots of confidence. When I told my friends in my bible study group, the group leader Jin told me that a couple of years ago, her four wisdom teeth were pulled out by an intern in Taiwan. Everything turned out great.

Finally the day came. I went to Cora to have a nice breakfast to fill my stomach. Then I headed to the dentist. I was telling myself that everything should be fine since this was a great dentist recommended by my friend.

Then the dentist and his assistant came .They welcomed me to the room. After I lay down on the chair, I looked around and noticed the instruments in a tool plate, they looked sharp , shining and rigid. I suddenly felt my body becoming stiff and my blood stopped flowing after seeing them

Several minutes later, the dentist came to me. He smiled at me and told me that I would be all right since my teeth looked not bad. He told me that my case should be a simple case. After I signed a paper, he started to inject anesthetic into my mouth.

“I am going to pull your upper teeth now.” the dentist told me. Actually at that time I was very nervous. My whole body was shaking, my hands were shaking, and my legs were shaking. Maybe my teeth were shaking too; although I could not feel them. I listened to music and repeated one of my favorite old songs “Affair of Half a Lifetime,” I realized that I had had a half lifetime affair with my wisdom teeth as they only stayed with me for half of my life or less.

After the four teeth were all pulled out, I became much more relieved. Although I could not speak because of my numb mouth, I used hand gestures and hand-written notes to communicate with the dentist and receptionist. He gave me a paper with simple instructions, as my case was a very straightforward one.

After I left the dentist’s office, I decided to buy some congee to take home since that seemed to be the only food I could have at that time.

I went to a congee house then gestured for their menu.

“Do you want to take eat in?” the waitress warmly welcomed me to the restaurant.

I looked at her and shook my head.

“Do you want to take out?” she asked me.

I nodded my head.

She looked at me and asked again: “Are you OK?”

“Do you have a toothache?” She was curious and concerned and asked again.

“I …had my teeth… pulled…” I spoke slowly and with difficultly as I could not feel my mouth at all.

When the waitress saw my mouth, it must have been full of blood; she cried out and ran away. At that time, I realized that I was not wearing a mask and I had scared her away with my bloody mouth.

I felt great as I found it can be fun to scare people.

After I went back home, I felt very weak and exhausted. I looked at my watch and recalled that the doctor said the anesthetic drug would not be effective after 3 hours. I was quite concerned what was going to happen after 3 hours. I chose to watch two movies to spend the 3 hours so that I would not be too nervous and watch the clock ticking.

As a matter of fact, I didn’t even take any Advil; I slept through the whole night peacefully. 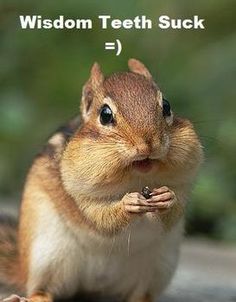 Today is almost one week after my dental experience. Everything is fine except I still feel a bit sore and uncomfortable in my mouth.

But the experience was not as scary as I thought. The best part is that I no longer need to worry about my wisdom teeth the next time I get my teeth cleaned. I also learned a lesson not to ask too many people before making a decision, as everyone can be different.