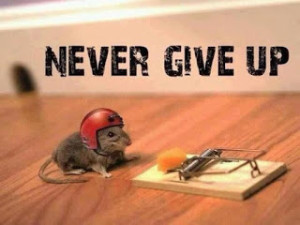 Don’t give up! Are you serious? 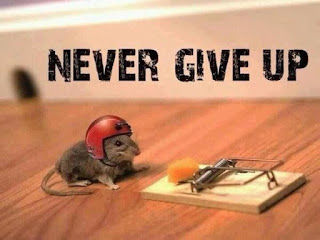 Lots of times in life, whether we listen to the radio, watch movies or listen to a speech, we are always motivated by lots of inspiring stories, and those stories tell us never give up.

I remember a movie I watched on the plane. It was about a single father who lost his job and became very poor. His wife was disappointed in him since he could not find a job in a long time, so she left him and their little boy. He was in financial and emotional difficulty for some time. He didn’t have money to pay for the rental , and  he even could not afford his boy’s daycare fee.

One day he found a sales job with no base salary. His job was to sell family healthcare machines to clinics. He earned commission from selling them. Otherwise he could not earn a penny. The machines were not easy to sell. He needed to carry a heavy machine everyday and was looking for a potential client who was willing to purchase that machine. Unfortunately one day his machine was stolen by a hobo . He chased him through many streets but he still could not find the thief. He was faced with the situation of paying for that machine by himself. This would put him in a more severe situation since he didn’t even have money for enough food.

One day, a well-known financial company was hiring unpaid interns for 3 months. After the 3 months they would make a decision who finally would stay. It was a very competitive internship , everybody was smart and was working very hard so that they hoped they could have a chance to stay in their dream company.

The father of course was working extremely hard in order to stay after the intern. After the intense competition, the father was eventually selected as the only one to stay and was transferred to full time employment.

The second story is from toastmasters. I have been a toastmaster since 2013. I have listened to lots of touching stories and lots of them are stories to encourage people to persist. What great people they are! I indeed love those inspirations, and I think everybody at toastmasters is a warrior

However, one cold and windy winter evening, our toastmaster club executives were sitting around the table and felt somewhat depressed because one executive decided to leave us.

“Why does he want to leave us?” I asked the others.

“Because he has been trying very hard to recruit more new members for our club in the past  2 years, but till now we haven’t successfully recruited a single new member. In such a case, we can’t reach our club goal and maybe we need to shut down if we don’t have enough members.” One executive said.

“We are trying to invite guests to our club for the next meeting. Maybe some of them would like to stay since we are a special advanced club!” I said.

“We have been trying to invite guests and they say they will come but lots of them don’t show up. ” Another executive said in a low voice. “Maybe because our timing is not good. We meet on Friday evenings.” 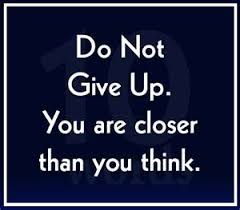 “I think we should shut down our club.” The founder said. “I don’t have confidence in our club, although it’s difficult for me to make the decision. But we only have 10 club members in total and some of them don’t show up. Our goal is 15 members, but we have been trying very hard in the last two years and we still can’t recruit one member. Our club is a great club; people can repeat their speeches and get round table evaluations, which can help them to listen to different people’s feedback, and it’s better for them to improve. “ The founder sighed and continued: “ But the reality is that people don’t visit our club so they don’t know our club’s benefits. Now even though J left us, he is a wonderful person and he has been trying really hard to publicize our club by producing flyers and bring them to external meetings.”

Since we only have 4 executives after J left us. I looked at everybody, and suddenly I was determined and said : “I love our club . Everybody has motivational stories . Even J gave speeches on such stories, which were great. I still remember them. But now we are saying we would like to give up our club and shut it down? Are people serious when they are telling stories of not giving up?”

“I have two friends who are interested in being guests in the next meeting. They probably would like to stay since they told me they are serious and want to improve their English speaking. Meanwhile, if every one of us can invite one guest to our club meeting, there is a chance we can recruit new members. We just need to extend our invitation and make them feel serious instead of breaking their commitments.”

The president R looked at me and he also said :”I agree with Tabitha, I think we should keep our club open and keep on trying. Although J left us, we still have 4 people here.”

You know what? The result is after the four of us tried together and worked collaboratively, we succeeded in recruiting 5 new members in one month. I feel proud of my part in the team. It is easy to say “Don’t give up”, it is harder to take actions. Without our efforts, the club would have shut down.

I am very pleased to say that through this event, I understand my heart says: Never give up! I am serious!