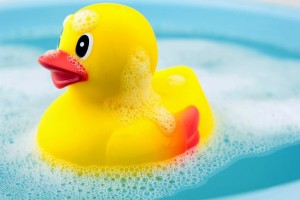 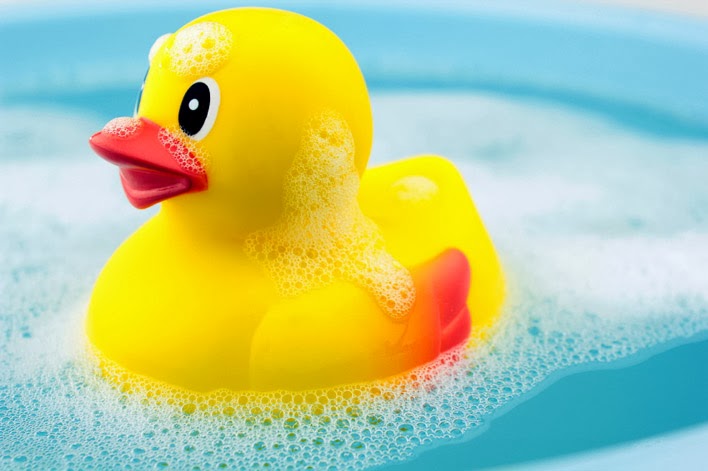 John is going to turn 9 next month but lots of my friends have said he acts more like a kid of 6.

I do not disagree with that. It’s true that John has made lots of new friends after he came to Vancouver, but it’s also true that half of his friends are between age 6-7 and they play very well together. However, John behaves like a big brother when his friends’ younger brothers, who are 3 and 4 come to him and ask for help. He can be very patient with them and he will teach them to build toddler level blocks.

In John’s world, everything is meaningful to him. Every object has its own life, such as his bathtub, slippers, small stool and his old clothes.

One day when we were planning to move from our old home to our new home, he worried about his bathtub very much. He used to take a bath in it almost everyday in winter .He liked to invite his entire rubber toys to bathe with him. He has a rubber duck, boat, elephant and fish. When he had a bubble bath, he would play hide and seek with his rubber toys. He not only enjoyed playing games with his toys , he also talk with his bathtub every night.

He asked me whether we could take the bathtub to our new home. I said probably not since the new home owner would also need the bathtub. He cried and kept on asking me to take it to our new home. He worried that the new homeowner would not like his bathtub as he did and the new owner would not bathe in it and play with it as he did. He worried that his bathtub would be lonely and unhappy having a new owner.

John is not a penny pincher . He usually is very generous. He shares his snacks and toys with his friends. He always keeps his friends updated when he finds something interesting and exciting. One day he was playing Lego with one of his summer camp classmates at his home. His friend said “Do you know that Lego is going to send out free gifts next Friday?” But the boy quickly covered his mouth with his hands and he murmured to himself :’How can I be so stupid and share this with others?” I was surprised to see the boy’s reaction on this.  In fact, John usually is the first person who broadcasts this kind of news to his friends once he thinks it’s good news. John always loves to share his happiness and new toys with his friends.

However, he does not like to send his used toys or used clothes to younger friends just because he thinks that all his toys and his clothes are his friends. He always says that he will never leave his friends. As a result, we are stocking lots of John’s old toys that he played with from 2-3 years old. What a soft touch heart John has! I am worrying that as he grows, our home will be too small to house all his friends.

John is a sentimental boy who worries a lot. Several days before the Christmas eve, he was worrying about Santa Claus. He was not sure if Santa would visit him on Christmas eve, as sometimes he was not sure if he had been a good boy or not. Santa only prepared gifts and visited good kids. After I assured John that he was a very good boy so Santa definitely would not forget him, he started to worry about how Santa could come into our home since we usually locked our door before sleep. He asked me to unlock the home alarm so that Santa would not be scared by the alarm when he came. He also asked me to keep the door open on Christmas Eve and keep the lights on so that Santa could find his way to our Christmas tree and put presents there. Have all the lights on so that Santa would see clearly where the Christmas tree is so that he can place gifts right under that. One day John was sad from school and I asked him why. He said he read a story and he learnt that Santa usually comes to kids’ home through the chimney but since we do not have a chimney how can Santa come to our home?

Although John’s English is not that good since he just came to Vancouver last summer, John writes more and more stories in his school journal. He’s so proud now that he can write so much in English. He writes about his weekends, his playdates and the books he read. He likes to read his journal to me before sleep.

John is a shy boy when he is in a new environment. I have been communicating with his teacher for a while since he came to his new school this Jan. His teacher said he was very quiet and he did not speak in class at all.

Not until I volunteered to be a parent driver for the filed trip one day did I realize how shy he is in his class. I had another kid as an additional passenger besides John. John only nodded or shook his head when the kid talked with him.

After we arrived at the destination, lots of kids played a “tag” game on the ground. John was just standing there by himself watching the other kids playing. Although he very much desired to play with the other kids, he was too shy to join in them.

I watched him standing there, lonely by himself. I was worrying about his shyness. His teacher said that John is shy because he is still not comfortable to speak English.

But then I realized that although he is shy and quiet in his new class , he is still a very happy boy. Currently he lacks confidence to speak English. However, he has improved a lot in reading and writing. The most important thing is that he is  happy. I should not worry about him too much and expect him to change immediately. As long as he is happy and healthy, I am happy.