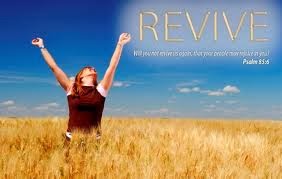 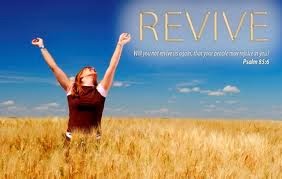 Last Sunday when I went to my church, I was greatly inspired by the Pastor’s words: Our god helps us not just to survive but also to revive.

After leaving the church, I have been thinking of the differences between survive and revive for a while. In our daily lives, how many people live because they are surviving? On a sky train or on a street, people are busy heading for their destination, either for work or study. How many of them survive without knowing their purpose for living?

In my opinion, the differences between surviving and reviving are huge: To survive, people just have to physically be living. They breathe air in and out  because their body needs it to live. They eat because they need food to maintain their energy. They sleep because they need sleep to rest. They work or study because they have to.

But reviving is very different. Reviving is like we are shaken up and reborn. We live in a new way  purposely energetically and positively.

Look around you and try to ask people if they understand the true differences of the two words, you may be surprised to see that unfortunately lots of people are living in a surviving way, which is a passive one.

Usually I meet with my friends who have children like me on weekends. When we talk about our kids’ education, mothers exchange ideas on after school programs for their kids. Some mothers say they need to send their kids to piano lessons because their friends’ kids are having piano lessons; Some of their friends’ kids are having swimming classes so they need to register their kids for swimming lessons as well.

One day I asked them: “Do your kids enjoy playing piano? “ One mother felt frustrated and said:” Everyday when I ask my kid to play piano, I will be very angry in the end since he always says that he is not interested in piano practicing. Or sometimes he just does not want to play. I have told him many times that piano practicing is very good for his brain exercies because he uses both his hands ,but he just does not listen.  He does not understand how much I have done for him on piano. I have spent lots of money on his piano lessons and I have purchased a piano for 5000 dollars. Sometimes he said he really hated the piano. As a result, almost everyday we fight about the piano.”

I had those feelings when my kid first came to Canada. I was afraid that his learning would not be as good as the other kids in school since he was new here and his English was not that good. Like other mothers, I registered him in lots of afterschool programs and one day I found that his playdate could only be arranged on Sunday since it is the only day that he has no class.

One day, my kid protested: “Mom, I am tired of going to classes, I just do not have time to play with my friends now.”

That night, I reviewed my son’s schedule and I realized that his schedule was too full. I realized that the true reason for me to register him in lots of the classes was because I was worrying that if he did not go to those classes his progress would be not as good as his friends.

Later, I sat down with my kid and asked him if he would like to cancel some afterschool classes and he said yes. Now he goes to those classes that he really enjoys. After that I was revived as a mother because I care about my child’s interest and inner requirements differently.

Similar to my software engineer friend, lots of people are working in jobs that they do not enjoy. When they are asked why they don’t quit their job and work on something else they really like, they usually said that is the only job they know how to do.

One day one of my friends quit his decent job. I asked him the reason as I understood that he had done very well on his work and his career was promising in a fortune 500 company. He said, he had been too busy to enjoy life with his family. The job that he really enjoys is the balanced one. As a result, he made a big decision to quit his job after 10 years’ service in the company since he wanted to change a way of life. Now he is working in a smaller company but he really likes it. Since then he can have a more vivid, energetic and enjoyable life instead of being a workaholic as before.

So what is your experience of revival?