It is usually not until people start living in another country that  they could realize how big the cultural differences are. When Chinese people stay in their homeland-China, they notice that people who come from different countries not only speak in a different language but also think and behave differently.

So when we see foreigners like biking instead of taking public transportation we think they are like our parents, who had no choice but biking to work. In fact the foreigners take biking as a lifestyle so that they can have some exercise on the way to work .

There are some other examples showing the difference of thinking or behaving ,too. Such as when having dining with foreigners please do remember that you do not order chicken feet ,any other’s kind of poultry’s feet or pork feet since they more enjoy seeing a big chunk of meat than a bird or a big’s part on a plate. Do not hold hand in hand with your best friend in front of foreigners, otherwise they would think you are a gay or lesbian , who chooses a homo sexual friend as your partner.

What I have just said is only the shallow impression we have of people –we call them foreigners when we stay in our homeland. Actually it is just a very limited and superficial impression from a limited angle , but the feeling is totally different after we move from our homeland and start living in those other countries –such as Canada, and we become “foreigners” in local people’s eyes. 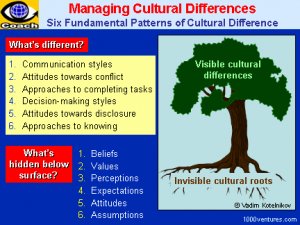 More and more immigrants like to move their family abroad. Many of them have two reasons :one of the most popular reasons is that for the sake of child’s better education, lots of parents throw away their good job and good life in China and move to Canada. I am among such parents. I would like to say that those parents are really brave and sacrificial. Another reason is that people like to take some adventures, change to a different life style, pursue a different life and career in another country.

In fact, due to the requirements of immigrating, most of the people who can successfully immigrate to Canada from another country are middle class or above people in their homeland. Fifteen years ago, only people who had most cutting edge technical skills or outstanding talents could meet the qualification of applying for technical immigration. They should also have command of good  English speaking and listening skills. In China, people who have those abilities are at least middle class people since only well-educated people can understand English well.

However, in the last 5 years, Canadian government has welcomed Investors as Immigrants ,so lots of those new immigrants are rich people in China.

Living in another country is a totally different feeling when Chinese immigrants are regarded by local people as “foreigners”.

Firstly, Chinese people are regarded as “bad drivers” in town. When travelers go to China ,lots of them are surprised by the way Chinese drivers drive in the street. Having 1.3 billion population, with more than 51% living in cities, the traffic in those first tier cities such as Guangzhou, Beijing and Shanghai is extremely busy. For example, Guangzhou, the center of Southern China, has over 20 million people on its 7263 square kilometers of land, while Vancouver ,the densest city in Canada ,has 0.2 million people living on its 2930 square kilometers. Let’s calculate it , Guangzhou’s density is almost 20 times that of Vancouver.

As China is still a developing country, people are not evenly educated or trained. Some people from villages may only finish education in an elementary school  or a bit of high school before they come to cities to work.Others groups obtain advanced degrees such as Masters or Doctors from western countries.

Well-educated people, especially those who had been living in developed countries for years, usually have a better manner than people who had not. Having private cars has only become prevalent in China in the last 15 years ,so those drivers are new comparing with those in western countries. As a result, drivers and pedestrians tend to take some risks when they think they can break the rules to arrive their destination faster and not be fined. For example, pedestrians like to across the street although the light is red, since they think the traffic is not coming that soon. Drivers will take U-turn on intersections, which is not permitted, so that they do not need to drive two more blocks to take one. When the traffic light is off because of a power outtage, there is no common sense for drivers to stop and take turns to cross the street.

Secondly, Chinese people are regarded as “cold face” or not friendly when walking in the street. The social background is that especially recently, Chinese people have a very high sense of awareness to strangers in the street. There have been several news reports about people getting sued after they help assisting an elderly who had fallen. There are some cases where little children especially boys are stolen by those human trafficker in children. So people are very cautious about strangers since they cannot differentiate whether they are good people or they are cheaters.

Thirdly, lots of Chinese people are in some degree superstitious in Chinese tradition. Lots of people believe red color brings good luck to the family. Fengshui is very important in choosing a house or decorating the house. Before getting married, some people like to go to fortunetellers and check with them if they can be good together. Yesterday I went to the school teacher’s office, I was very surprised that he has lots of white flowers made from toilet paper in his office .In China, white or black flowers are only for people who have lost their family in and after a funeral. It will be considered to bring bad luck if somebody sends white or black flower to others.

Last but not least, Chinese people, along with some other Asian people, they are collectivist, not like people in most western countries, where people are more individualist. As collectivists, Chinese people like to have a big extended family. Although young couples are now more likely to live by themselves , they will live close to their parents or even grand parents. They like to have more family reunions. Some grownup children like to have dinner with their parents everyday. After those children become parents, they sometimes hire workers for their parents, then bring their kids to go to their parents’ home to have dinner. Take my grandmother’s family for example, she has 7 children, 10 grandchildren and some great-grandchildren, they always have big family reunions on weekends, small family reunions on weekdays. So elders will not feel lonely after their children have grown up. My grandma is always busy knitting sweaters for her children, grandchildren and great grandchildren in her whole life.

My last two cents is that, every culture has its own characteristics, there is no right or wrong in different cultures. But remember the old Chinese saying that “when you go to a different place, you must respect their local cultures” .By doing this, people will have a more peaceful life while living in a different culture.